Today, March 8, is the International Women’s Day, a date to commemorate women contribution to science and pay due tribute to Marie Gertrude Rand (1886-1970), an experimental psychologist with outstanding contributions to ophthalmology, physiological optics and lighting instruments design. She received her B.A. (1908) in experimental psychology from Cornell University and her Ph.D. on the “The factors that influence the sensitivity of the retina to colour: A quantitative study and methods of standardizing” from Bryn College in 1911. Later, at Johns Hopkins, she developed many projects on Physiological Optics and on industrial lighting, among them she was commissioned to design the glare-free illumination of the tunnel that connects New York and New Jersey. Her research also involved the study of the perceptual abilities of the retina for colour discrimination. Among her main achievements, she developed an optical instrument not only for qualitative identification of colour blindness, but with enough precision to define the type and degree of colour blindness for each subject. Her abilities were in demand during World War II when the vision standard tests she had devised became absolutely essential to choose pilots and ship lookouts. She was the first woman fellow of the Illuminating Engineering Society and received a Gold Medal award in 1963. Also, she was the first woman to be awarded the Optical Society of America’s Edgar D. Tillyer Medal in 1959 for outstanding research in vision. 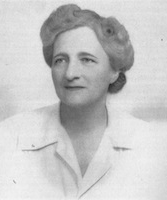 Share on social media
back
Copyright © 2021. All Rights Reserved -