Bestrophinopathy (Best disease), caused by mutations in the BEST1 gene, is an hereditary maculopathy that eventually causes eyesight loss in young people. A research group from University of Pennsylvania (US) used gene therapy to successfully treat this disease in a canine natural model. Subretinal microinjection of therapeutic adenoassociated virus containing the human BEST1 gene corrected the mutation effects in the retinal pigment epithelium (RPE), which is the nursing photoreceptor cell layer. Ensuing the expression of BEST1 wild-type gene in the RPE, macular degeneration was stably halted in the animals for more than 5 years. The researchers were also able to detect early onset symptoms of the disease prior to the death of photoreceptors in the macula, which could guide the clinicians before the pathology alterations are irreversible.

These results are very promising and support further clinical trials for gene therapy in human patients bearing mutations in the BEST1 gene. 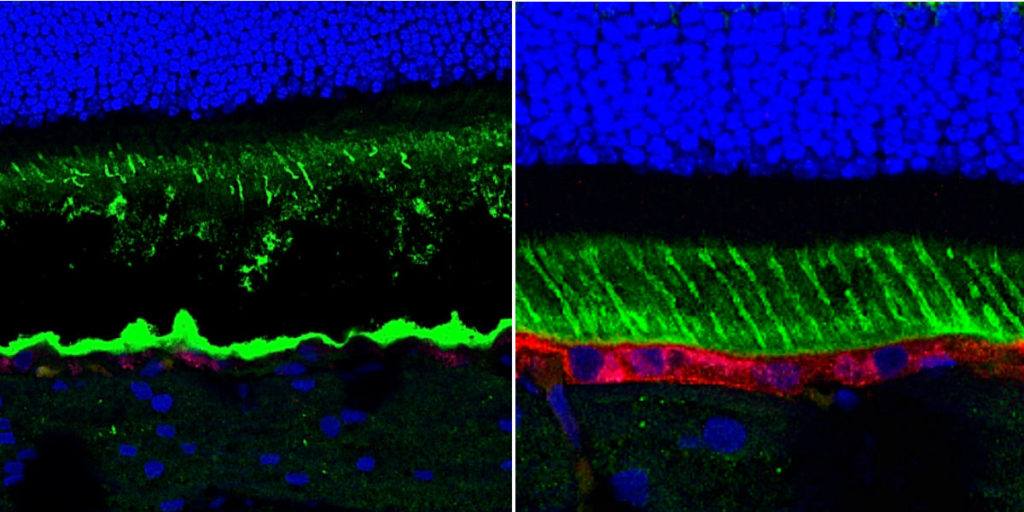 “Gene therapy successfully treated a canine version of Best disease, a blinding disorder, the effects lasting more than five years. In these images of the retina of untreated (left) and treated (right) dogs, one can see that BEST1 gene expression (in red) was restored following treatment. In addition, the threrapy restored the structure of the RPE (green layer), a layer of cells that supports the light-sensing photoreceptor cells.”

(Image from the article https://news.upenn.edu/news/new-gene-therapy-corrects-form-inherited-macular-degeneration-canine-model)

Share on social media
back
Copyright © 2021. All Rights Reserved -